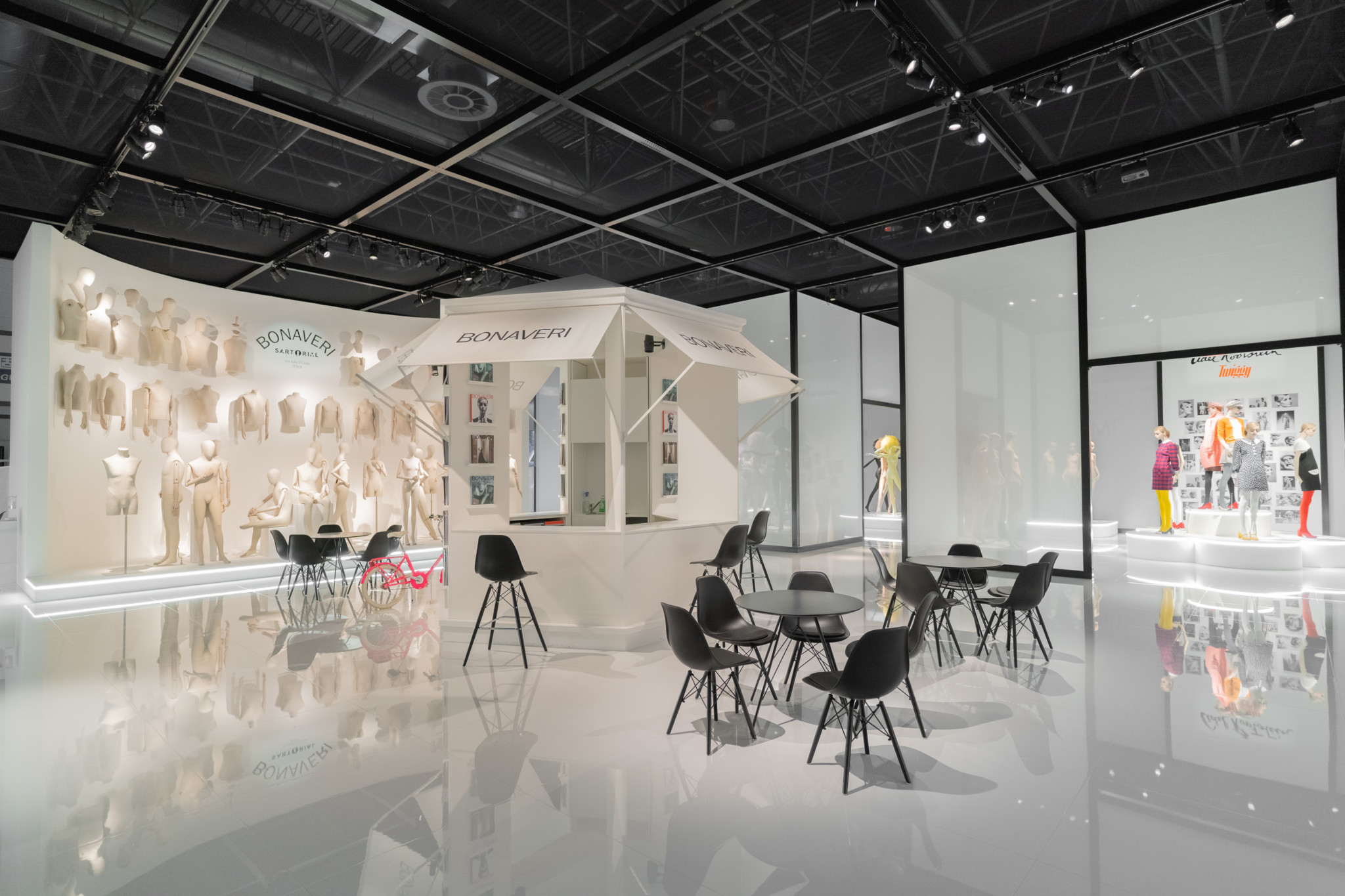 EuroShop is the triennial fair dedicated to retail innovations. It was the chance for Bonaveri to present its first redesigned Adel Rootstein collection – the brand acquired in the last months to relaunch its products and history. It is the iconic Twiggy to display the timeless charm of the swinging London, along with other innovations from the Bonaveri brands: Schläppi, Sartorial, B By Bonaveri.

The stage for this presentation, aiming at displaying the artisanal skills that the company has been developing for over 60 years, is “The House of Bonaveri”: more than just a product exhibition, the “house” unveils the artistic steps in sculpting and tailoring at the heart of Bonaveri quality products. This is the core idea for the Sartorial collection, where customizable mannequins and bust forms change their materials, colours and finishes. At the centre of the stage, the BNatural project presents biodegradable mannequins made from renewable sources. BNatural is the expression of the commitment from Bonaveri to look for new, sustainable materials, packaging optimization and the compliance with the most recent certifications.

The central part of stand hosted a kiosk where our Vogue style magazine was on the show and available for clients and visitors. 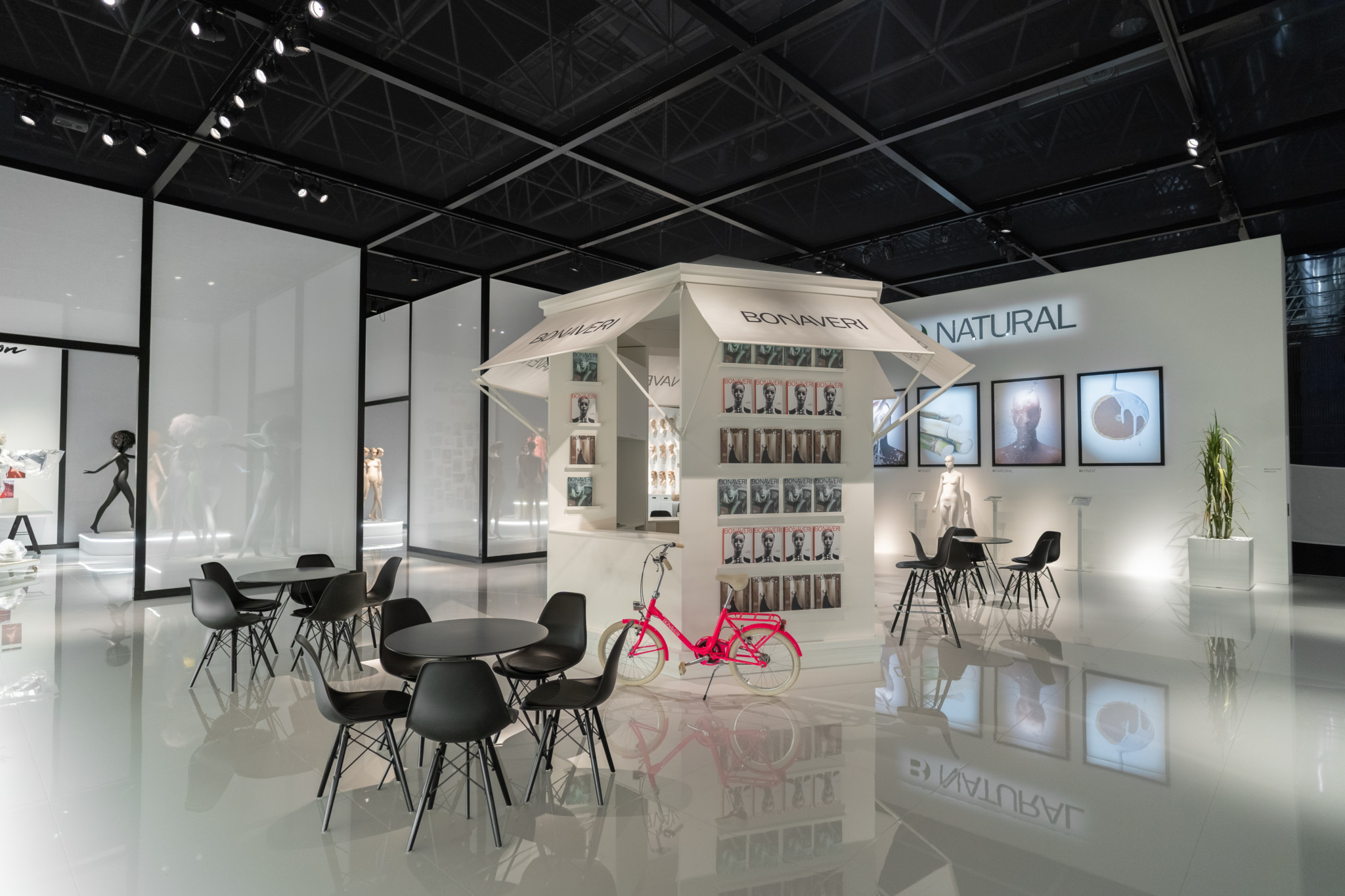 We also offered a visitor experience by demonstrating artistic steps in making wigs, make up, sculpting and tailoring. Our talented artisans at work were available to answer questions, giving visitors the opportunity to interact with them and find out more about the way we make our products.

Twiggy is the rebirth of one of the most historical Adel Rootstein collections, a collection that transformed the relationship between fashion and the mannequin.

John Taylor, the sculptor of Twiggy collection, was able to give life to this first mannequin with realistic magnetism, embodying the values of an entire era, an aesthetic and vibrant culture that would go on to influence the wider world.

Adel Rootstein was always one step ahead; she foresaw fashion, identifying the personalities that were emerging as foundation examples of a changing industry. Her very first creations epitomize the dynamism and energy of 1960s London influencing an entire generation of global fashionistas. 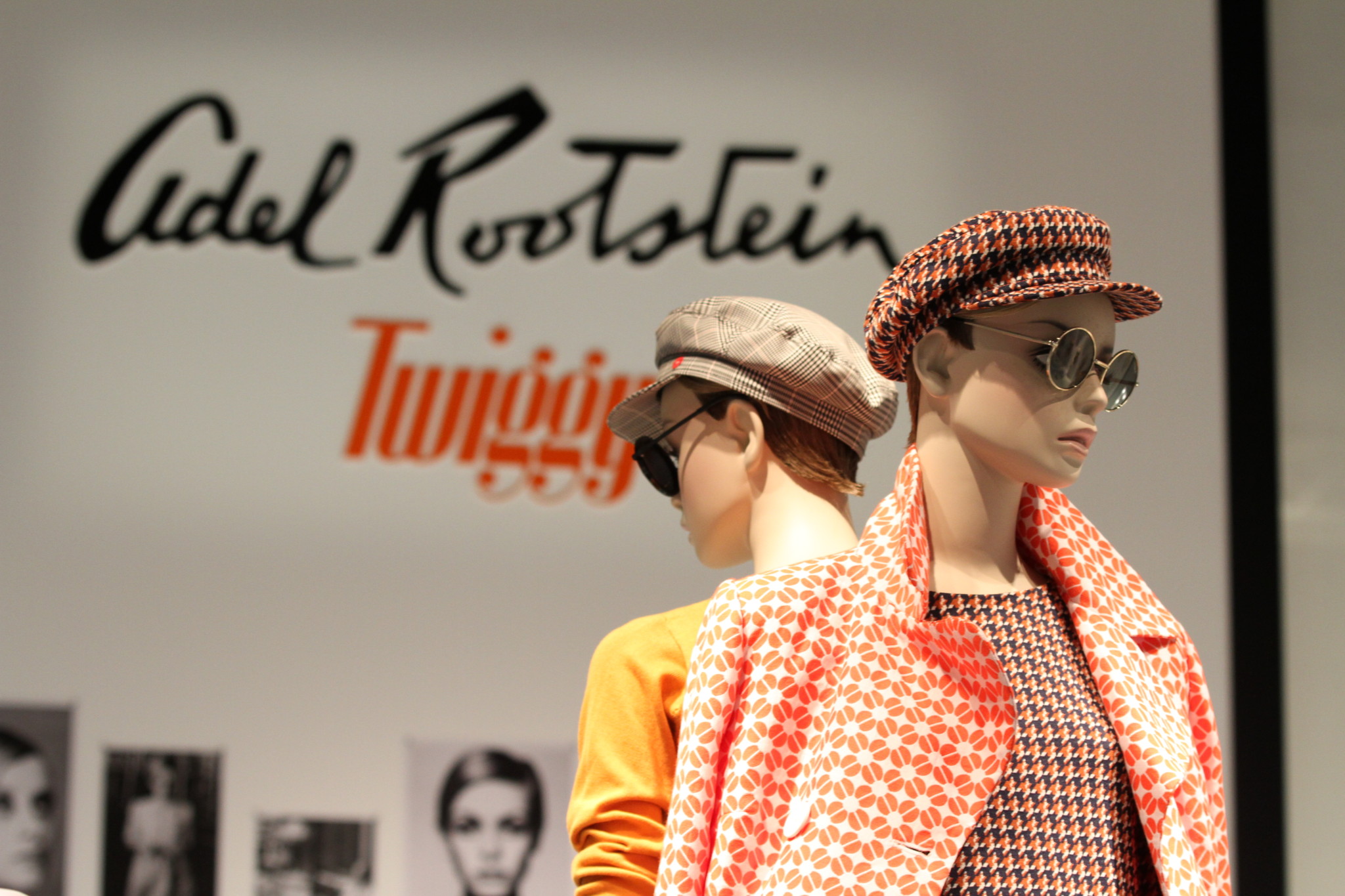 Twiggy became an emblem of change and a symbol of rebellious youth culture, with her slender physique, her big fawn eyes and her “boyish” haircut. She was a perfect reproduction of the iconic model with a height of just over 1.60 m, size 40 and an unusual pose.

The new Twiggy collection includes hair and makeup that personifies the famous model: the motif on the eyelids, as well as the drawn eyelashes, without forgetting the freckles that contributed to giving it that cheeky and youthful air. The soft shade of the mannequin is re-proposed with a light finish, in Pale Cameo color.

A great labor of love has been carried out in the Bonaveri workshop, to marry the spirit of the past with needs of the present. Twiggy’s new silhouette is a contemporary interpretation of a new era, whilst still honoring the spirit of the original.

The result is a figure that embodies the spirit of our times, one that contains the essence, magnetism and the allure of the original form. Even in the world of realistic mannequins, reality is never objective. The creative process intervenes and calls for an original interpretation of an emblematic symbol.

“Rootstein represents a milestone in the evolution of mannequins” – states Andrea Bonaveri, CEO of the Company – “having been the first to give a form to contemporary aesthetics, inspired by models and real-life figures who perfectly embodied the spirit of the time. With this acquisition we were able to make a dream come true. It is our intention to embrace this legacy and elevate it to a new splendour, updating it with our aesthetic sensibility and manufacturing capability. This acquisition is the expression of a strategy that has led us to acquire the world’s top player in the realistic mannequin market”.

Obsession is the newborn of the Schläppi family, rooted in a tradition of vibrant inspirations. A new collection that embodies a multitude of voices, sounds, attitudes, emotions and manners. 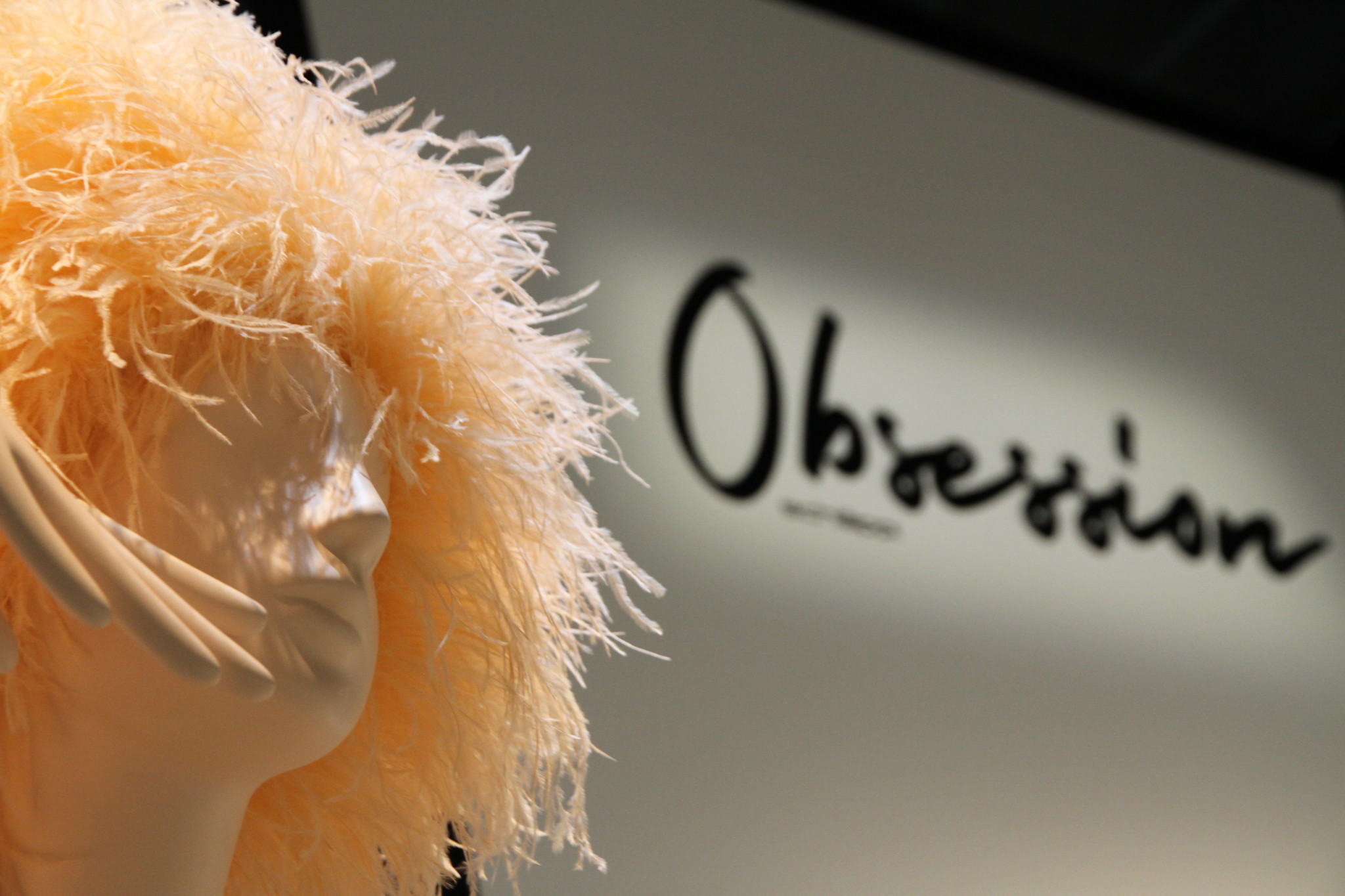 Obsession recalls the vision and inspiration hidden within the original Schläppi collections modelled by sculptor, Lorenzo Piemonti alongside the Sixties and Seventies. It goes back to the roots of the very first and most distinctive of all, Schläppi Loisir: one of the most indecipherable collections ever created.

To design the Obsession Collection Emma Davidge – Creative Director of Chameleon Visual, also designer of Bonaveri’s Aloof and Tribe Collections – has captured Schläppi Loisir DNA, enriching it with the magnetic force and cultural energy that found its center in the Studio 54 in New York. 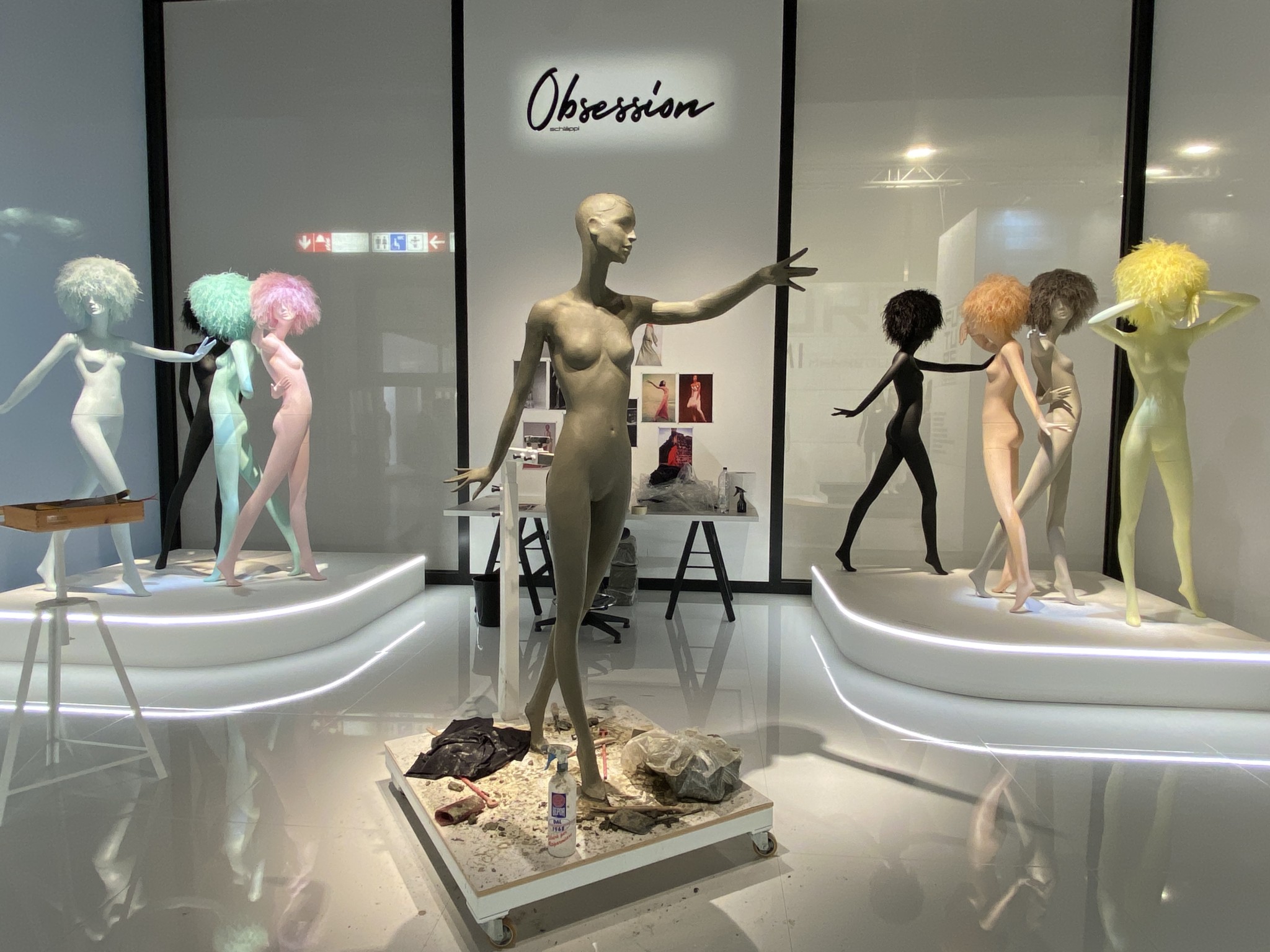 The Seventies revealed themselves as a decade of freedom, cultural changeand glamorous allure. The peculiar aesthetics of that disco glamour environmentwas defining new codes and styles whose influence has gone far beyond theboundaries of the city of New York. Among the many, four women stood out toimpersonate and express with their personality the spirit of that era: PatCleveland, Jerry Hall, Grace Jones and Diana Ross.

Theatrical poses are theirmost evident characteristic: blatant in their gestures, articulated in space,sensual in a sense of unruly grace, provocative in the allusion to their ownpower. Obsession represents a mannequin capable of dominating the stage, ofmaking the dress the focus of desires and attracting the gaze.

The personality of the collection radiates also through a glamorous and couture use of decorative elements. Instead of using traditional wigs, Emma Davidge has designed colorful and voluminous feathers for the mannequin’s dramatic headwear, returning the sense of magic that makes the collection timeless and present in our era at the same time.

For the first Obsession photo shooting, Jason Wu has generously allowed some magnificent haute couture clothes to be dressed by the collection: exclusive garments that in their volume, colours and silhouettes have contributed to give a touch of unparalleled beauty that perfectly matches the personality of the new collection.

In 2016 Bonaveri presented the very first biodegradable mannequin in the world: a totally innovative product made of B Plast®, a bio-based polymer consisting of 72% sugarcane derivative and painted with B Paint® made solely of renewable, organic substances.

This biopolymer has been subjected to stringent checks by the Belgian certification institution TÜV Austria that issued the “OK BIOBASED” 3 Star Certification, which certifies the percentage of renewable source material present in the product. 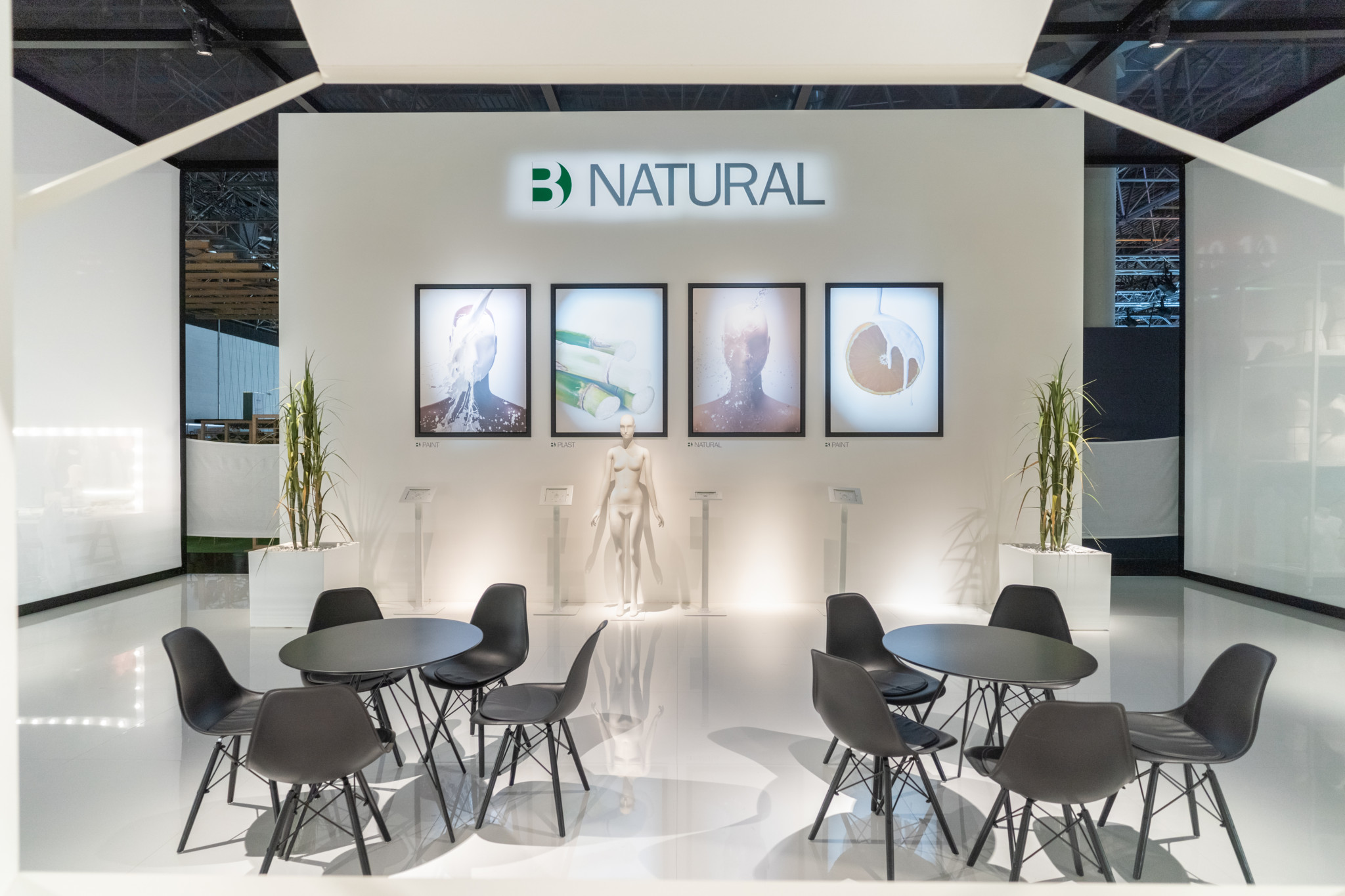 BPaint consists of 100% natural raw materials and it is free of any petrol-based substances. This exemplifies unequivocal innovation in using natural paints without compromising quality and performance in any way.

BPaint has also been subjected to strict checks by the Belgian certification institution TÜV Austria that issued the “OK BIOBASED” 4 Star Certification, certifying the material is produced from 100% renewable sources.

In 2016 Bonaveri also defined an eco-friendlier packaging system: the new packaging developed led to a complete change of materials and design. It is made with sustainable materials, a lower weight – that reduce the consume of energy needed for transport – and it presents a significant optimization of the box measurement in order to increase the efficiency in the logistic process, and a sharp packaging time reduction.

It provides an impressive 40% reduction in CO2 emissions, 37% reduction of energy consumption and 56% decrease in water usage.